Ukraine’s embassy in Iran has appeared to delete a statement suggesting technical problems were to blame for the crash of a passenger jet near Tehran on Wednesday morning.

That statement appeared to back up earlier assertions by Iranian officials that a faulty engine had led to the accident.

“According to preliminary information,” the statement had read, “the plane crashed as a result of a technical failure of the engine. The possibility of a terrorist attack or missile strike are currently ruled out.”

But by 10am local time, that page was no longer accessible from the embassy’s site, with no additional information given about the details of the crash.

Later, a new statement appeared at the same web address saying that it was for an official commission to determine the cause of the accident.

There was no immediate explanation for the apparent retraction.

Flight PS752, a Boeing 737-800, took off from Tehran’s Imam Khomeini International Airport at 6:12 am, losing contact two minutes later. The crash happened a few hours after Iran launched missile strikes on US military bases in Iraq

According to aviation authorities, there were 167 passengers and 9 crew on board. The vast majority of those on board were Iranian (82) and Canadian (63) citizens.

Tehran was quick to blame technical problems for the crash. Qassem Biniaz, a spokesman for Iran’s Road and Transportation Ministry, said the pilot “lost control of the plane” after a fire broke out in one of its engines.

Modern aircraft engines are designed to withstand the failure of an engine, even if it catches fire. What seems to be unusual in this case is that after a normal climb, the plane stopped sending all data at around 8000 feet. That would seem to suggest a catastrophic incident of some sort.

Clues will likely be contained in the plane’s flight recorders, which were recovered shortly after the crash. Iran’s civil aviation authorities said they would not follow normal practice of sending the boxes to US-plane manufacturer Boeing, but declined to say who would be responsible for analysing the data. 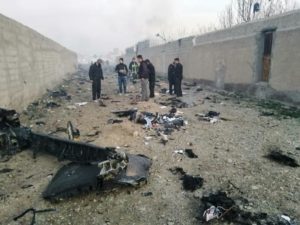 At a hastily arranged press conference on Wednesday morning, Ukrainian International Airlines (UIA) discounted the possibility of technical problems. There was “nothing wrong” with the aircraft, UIA’s president Yevgen ​Dykhne insisted. The plane was three years old and had only two days previously undergone a scheduled technical check.

“We guarantee the safety of our aircraft and the high qualification of our crews,” he said.

The airline announced it would be suspending all flights to Iran until further notice.