A Story Of Power, Oppression And Resistance: How Iranian Women Are Leading A Revolution
November 8, 2022 by Janice Gassam Asare
Sevil Suleymani

The death of 22-year-old Kurdish woman Mahsa Amini has sparked protests in Iran. Amini was arrested for breaking the country’s law that requires women to cover their hair with a headscarf and she later died while in police custody. Since Amini’s death, women and girls in Iran have been removing their headscarves as a form of protest. Now, all eyes are on Iran, with some equating women’s removal of their headscarves to the fall of the Berlin Wall. At least 1,000 people have now been charged for their involvement in the protests, which began in mid-September. Sevil Suleymani is an Iranian woman who has been using her social media to speak out about what’s been happening in Iran. Suleymani sat down to discuss the state of the country and why Iranian women from marginalized backgrounds must be centered in the public discourse.
Janice Gassam Asare: Sevil, could you share a little bit more about who you are for the Forbes readers?
Sevil Suleymani: My name is Sevil Suleymani. Currently resident in United States, but I was born and until age of 17, I was in Iran, northern side. Originally, I’m Azerbaijani Turk from Turkish region of Iran, and besides that, the rest of my life I’ve been living in United States. Currently I’m doing a Ph.D. in Sociology and I’m working on my dissertation on social movements and ethnic minorities in the Middle East.
Asare: What are your thoughts around what is currently happening right now in Iran? What are you hearing about what’s going on from any friends or family members that you have back home?
Suleymani: Yes. My whole family, all of my relatives, are living still in northern part of Iran and in Tehran as well. So, what’s happening in Iran, actually first it was uprising, but now even we can call it a women’s revolution. What I mean by women’s revolution…is what ideologically has been done to women in last 40 years and the whole politics of oppression that has been in the name of women and use of women’s body ideologically by the state.
This revolution is saying no to all of those systematic oppressions towards women and all other groups in Iran. Historically, we have to mention that over 40 years ago, 1979, when Iranian revolution took place, one of the first policies that they put in action was compulsory hijab. The reason they chose that, [was] because in the revolution they were thinking we are fighting against Western modernity. Covering women, this compulsory hijab, can be a first sign of saying no to Western society or Western ideology. So, what happened here, no one asked women if you want to wear [a] hijab or you want to say no, if you want that modernity or not. But women’s body, it turned as a battleground between West and anti-Western ideology.
MORE FOR YOU
$100M Magic: Why Bruno Mars And Other Stars Are Ditching Their Managers
Mango Exploiter Explains $65 Million Bet To Get Rich Off FTX’s Demise
Judge Rejects Arizona GOP Lawsuit To Extend Voting Hours As Trump Sows Fraud Claims
TOPSHOT – Iranians wave the national flag as they march during a pro-hijab rally in the capital … [+] Tehran on September 23, 2022. – (Photo by AFP) (Photo by -/AFP via Getty Images)
AFP via Getty Images
Asare: What is the best way to support the women and the people in Iran right now? What are some ways that we can amplify what’s going on and support the people there?
Suleymani: First, hearing the stories, the correct and the multiple layers of what’s happening in Iran. This, in the beginning, started with Mahsa Amini. This Mahsa Amini was a Kurdish girl who was beaten to death by morality police because of the compulsory hijab. This first tells us Iran is more than just being Persian, it’s more than one ethnic group, because she was from a Kurdish community that were like just visiting Tehran and that’s what happened. 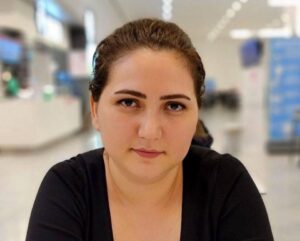 And then all the uprising started from the marginalized groups surrounding Iran…between all the ethnic minorities and started going to other regions of Iran. These stories, these uprisings and this new revolution can tell us the multilayered story of Iran, that a lot of America does not know. What the public can understand: hearing these stories, sharing them, supporting them, because there is a lot of resources in the United States, a lot of medias. The world is hearing the voice of United States, so using these opportunities and giving voice to those marginalized groups in Iran and hearing their stories.
Asare: Sevil, what do you think people misunderstand about Persian culture? Since the murder of Mahsa Amini occurred and the uprisings began, have you heard or seen any misinformation or misunderstandings of Iran, the Iranian people or Persian culture?
Suleymani: Unfortunately, we always in the United States have misperceptions [about] Iran. I mean hearing me, I can speak Turkish…they are so surprised. ‘How you can be from Iran and speak Turkish?’ Because almost up to 40% of Iran are Turks, are non-Persians, and besides that, a lot of other minorities are living in Iran and Kurds are one of them, Balochis or other cultures. In the United States, we don’t have that perception…we don’t have the diverse culture of Iran.
When we talk about Iran, first [thought is] Muslim country. ‘Oh, you’re Muslim, so you choose hijab.’ No, we didn’t choose hijab. Hijab is not part of that culture. This is a compulsory hijab. Compulsory hijab has nothing to do with Islam or being a Muslim. It comes from state policy. As culturally Muslim, I don’t choose to wear hijab. I don’t see it’s part of my identity, so saying no to compulsory hijab, it doesn’t mean I’m saying no to my religion or I’m saying no to Islam. So that’s why associating hijab with just Islamic culture is just such a wrong perception. Misperception of that religion, misperception of that culture, and also a lot of women who are fighting against this compulsory state policy.
Asare: So, you study social movements. What do you hope will be the result of the movement that’s happening right now in Iran? What is an ideal situation for the movement?
Suleymani: My master’s thesis was about Azerbaijani women in Iran, their agency, empowerment and oppression, so what I realized looking at Western media, even a lot of people from Iran, what they don’t pay attention to is the actual agency that women have, especially marginalized women. When I was studying that I met a lot of local women. They have their own businesses, they are fighting, they have their own perception of feminism and women’s rights, and they are fighting for that.
What in this revolution surprised a lot of people…the world started realizing this agency, agency of those women…and empowerment from the oppression they faced for years. I’m not sure still because the Iranian state is strong. It’s difficult to say this revolution will throw out that state, but I’m pretty sure it will weaken them. However, even if the state stays in power after that with this revolution, these movements have been seen as a potential that a lot of organizations, a lot of non-state actors and other state actors will see these women as agents of change…that they need to be taken seriously. This will play a role in decision makings that will be about Iran in a lot of national and international organizations, and that is the big revolution and the big change for Iranian women and their request from world.
Asare: Is there anything else you think is important for the Forbes readers to know?
Suleymani: It’s important to hear what Iranian women say. Our understanding and perception, sometimes is not correct and based on certain stigma and the stereotypes. [Iran] has a diverse culture. We need to hear those stories and how those local groups have their own movements and their own needs. 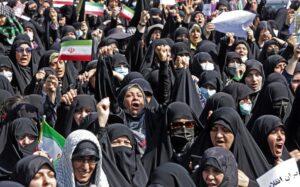 I’ve been studying Azerbaijani women for years and I know what they want and what their oppression is based on, the linguistic discrimination, based on the religious or cultural discriminations. It’s not the same with a lot of Tehran, Persian or other groups. We need to hear those voices. We need to understand their unique needs and their requests. Being a Muslim, it doesn’t mean all the Muslims countries, that more than 15 or 16 countries in the world, are asking or they have same culture and they have same requests. It’s important to hear their voice instead of us judging or evaluating their culture based on our misperceptions.
This interview has been lightly edited for clarity and brevity.